The errors reported are the following:

AND(TRUE; “AAAAA”) returns #VALUE! while AND(TRUE;A1) with A1=”AAAAA” returns TRUE. The grid engine does not differentiate between these two cases. In the example above, it always returns TRUE.

If the criterion contains ‘*’, ‘?’, the character will be interpreted as a wildcard (in the same way as Excel).

The protection character of these wildcards is ~

In addition, string criteria are limited to 255 characters in Excel. The GT engine does not have this limitation.

When importing an Excel file into Design, the named fields are imported.

The following named fields are maintained (local or global)

A name field can be used in graphs. The engine correctly handles the reference operator on the fields. In the table below, the field named “Quantity” is the data range C6:C8, the field named “CA” = D6:D8. In E6, the formula is “Quantity*CA”, which in this case is C6*D6. 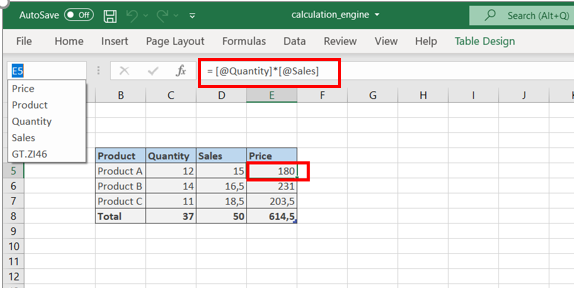 The following fields are not imported:

All global named fields are reimported at each Excel import, even those that are not in the import field. The list of named fields can be viewed (but not modified) via “Tools” –> “View Names”. Duplicates with the names generated in the Excel export are checked when saved in Design (only a warning). However, a collision is allowed if the name field and the component coincide.

Table function in Excel 2007 (and higher)

The Table function in Excel is not supported.